Subtitles Found! We found subtitles for the program Last Men in Aleppo. Please scroll down to get them, or go here for a preview 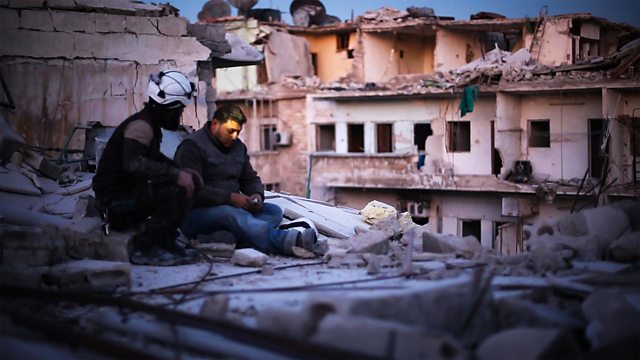 A Storyville documentary: through the eyes of the volunteers of the White Helmets, we experience daily life and death in the streets of Aleppo in Syria after five years of war.

Browse content similar to Last Men in Aleppo. Check below for episodes and series from the same categories and more!

After five years of war in Syria the remaining 350,000 citizens of Aleppo are constantly under siege. Through the eyes of the volunteers of the White Helmets, in this film we experience daily life and death in the streets of Aleppo.

Khalid, Subhi and Mahmoud are founding members of the White Helmets and are the first to enter destroyed buildings, scouring through the rubble in search of bodies and signs of life. They have chosen to stay in Aleppo to help save their people during the never-ending siege.

Many lives including those of countless children and infants are lost during the bombings. But each day is a dilemma and a conflict for the men - should they stay and risk death themselves, or should they try to get out and save their own families, as other have?

The film is a collaboration with the Aleppo Media Centre, and tells the extraordinary story of real heroes in an epic human tragedy.

The film is directed by Feras Fayyad, co-directed by Steen Johannessen and produced by Soeren Steen Jespersen and Kareem Abeed.